When addressing people, LAA Public Outreach Coordinator Ms. Hopolang Lenoesa said land administration is the way in which the rules of land tenure are applied or legally made operational and they comprise a wide range of systems and processes to administer.

Ms. Lenoesa said in as much as most people turn to confuse documents such as Form C and Lease, in land administration they are official records of ownership, but the most important issue is to apply for a lease according to the Land Act of 2010 for proper land records.

She said regardless of being residential land, commercial or farming use; Lease allows the land owner to occupy and use it for a specific period of time as per lease type.

LAA Public Outreach Coordinator said for a person to apply for a Lease; documents such as allocation title or Form C only for those born on or before 1961 but after such year it must be accompanied by verification of council and signed by Town Clerk or Chairperson, identification and plan of survey known as S-10.

She pointed out that the processes of land administration may as well include the transfer of rights in land from one party to another through sale, Lease, loan, gift and inheritance; the regulating of land and property development or even by resolving of conflicts concerning the ownership and use of land.

Ms. Lenoesa further highlighted that in case of land related conflicts which lead to court cases, resulting in social costs, creation of fake documents where a single property is sold to several persons, encroachments and illegal constructions; the Lease will help to identify the rightful owner of such land.

Also sharing the same sentiments, Ms. Mamello Tau from LAA Customer Service Department also highlighted the importance of paying ground rent which is calculated by area size and rate as per its location promote services improvement for clients and they include lease holders for the use and occupation of land parcel, all commercial sites, industrial, hotels, warehouse and petroleum or wholesale.

Ms. Tau indicated that all primary residential sites of which can be described as a site where land owner resides on daily basis are not liable to pay ground rent, but they are expected to come to LAA to fill excemption form from ground rent.

Ms. Tau said ground rent is paid annually at any time before March 31 and it can be paid in installments if arrangements were made with LAA prior to due date to avoid being charged penalities.

When sharing his views, one of the business owner Mr. Marathane Nts’aba said in as much as they are law abiding citizens, they are against high rate of ground rent which they are charged on commercial sites.

Mr. Nts’aba said looking at the economic status of Berea, most people are living below poverty line and there are no major economic activities such as factories to boost business as compared to Maseru and other districts but they are faced with such same high rates.

He recommended that such high rate to be revised in order to cater for developing business community.

They further recommended for more intensive campaigns as majority of people in rural communities are still not aware of such important land administration issues.

Representing District Administration office, Mrs. Manthlang Makhotsa commended LAA for its initiative of briefing people about services they offer and she further urged those who took part at the workshop to share such important information to those back in villages so that they can be on a same level of knowledge.

The LAA which its mission statement is to provide quality, cost effective and efficient land administration services to land users and to general public in order to facilitate the country’s economic development was established as an autonomous government body by the Land Administration Authority Act 2010. 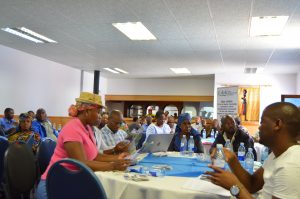